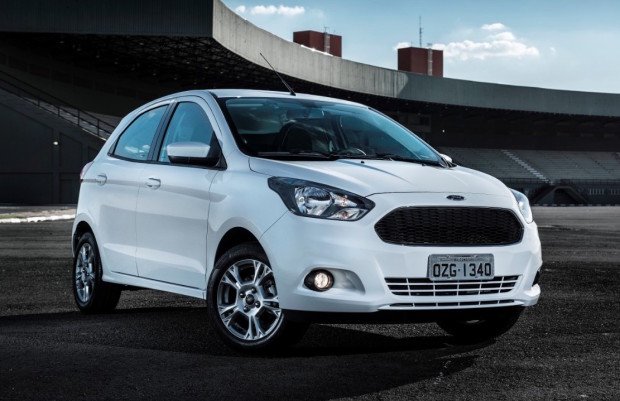 The original Ford Ka and its 2008 follow-up were three-door cars designed for city driving, offering limited space but lots of character. The new Ka+ is an altogether more sensible car that places a priority on room for passengers and value for money, giving it a genuine point of difference in the city car class. As an example of this approach only one engine – a 1.2-litre petrol – is offered, albeit with either 69 or 84bhp.

Rivals to this five-door car range from the Hyundai i10 and Volkswagen Up to the bigger-yet-bargain-basement Dacia Sandero.

“Appreciably bigger than other small cars”

The boot of the Ka+ might not be as big as you’ll find in a Dacia Sandero, but it comfortably beats a Volkswagen Up or Hyundai i10 for carrying capacity, although it’s frustrating that you can only open it remotely via the kia or a button on the dashboard. True, there’s a high load lip to negotiate and you’ll still struggle to carry a folded baby buggy, but there’s enough room for the weekly shop and the rear seats fold down in a 60/40 split to extend the load area (albeit leaving a large lump in the floor).

You get more rear leg room in the Ka+ than in rivals, too, helped by there being plenty of space underneath the front seats to put your feet. Sitting a tall passenger behind a tall driver is a squeeze, but not impossible, although the pronounced lump in the floor and overly soft central backrest mean that trying to get three people in the back is a challenge.

There’s plenty of head room in the front, plus lots of storage spread across the glovebox, door bins and central cubby holes.

“Rides well, and is generally quiet”

Despite a lack of reach adjustment in the steering wheel, it’s still easy to find a good driving position in the Ka+, and the slightly raised seats compared with a Fiesta give the driver a good view out. The suspension and 15-inch wheels do a fine job of isolating occupants from small bumps in the road, and for such a small car the Ka+ is also impressively well insulated from tyre and wind noise.

The 1.2-litre petrol engine is quiet around town, but becomes coarse when revved and makes for a fairly vocal motorway companion, where a 70mph cruise will have the revs hovering above 3,000rpm.

“Looks and feels rather basic”

If there’s one area where the Ka+ lags behind rivals, it’s in the dated and rather cheap-feeling dashboard. The dials are a perfect example, because they look as though they come from a 20-year-old Fiesta, while the central screen is also small and lacking even the option of satnav. There is, however, a CD player, which can’t be said for many new cars these days.

It’s still just about got the edge on a Dacia Sandero, but the difference isn’t as great as buyers will be hoping for.

“Doesn’t get much easier than this”

If you’ve ever driven a Ford Fiesta and enjoyed how well weighted and direct its controls are to use then you’ll have a good idea of what to expect from the Ka+. The steering is a particular highlight, responding quickly to inputs without ever feeling twitchy. The gearshift slots home precisely, the pedals are nicely weighted and visibility is good, making parking easy.

The only disappointment is the 1.2-litre engine, which even in the higher of its two available outputs feels breathless as soon as a hill comes into view. As such, overtaking isn’t really recommended.

“A small car that offers a big fun factor”

It might have a bit of body lean in corners and lack the ultimate grip of a Fiesta, but the Ka+ is still an enjoyable car to drive because it turns in eagerly, always feels agile and offers enough feedback through the controls to tell you what the tyres are doing. It’s a shame the engine isn’t more willing to rev, because otherwise this is a fun little car to drive.

“Warranty could be better, but Ford has a solid reputation”

As with all Fords, the Ka+ comes a warranty that lasts for 5 years or 150,000 kms, whichever comes first. It’s about the minimum a manufacturer can get away with these days, with others offering much better alternatives, such as Kia’s seven-year, 100,000-mile warranty on the Picanto or Hyundai’s five-year and unlimited-mileage cover on the i10.

At least Ford has a reasonably good reputation for reliability. The manufacturer came 7th out of the 24 included in the 2016 JD Power UK Vehicle Dependability Survey, placing it above Nissan, Renault, Honda and BMW, but below Kia.

2Not top of the class, but still pretty good”

Regardless of whether you opt for the lower or higher output version of Ford’s 1.2-litre petrol engine in the Ka+, fuel economy in official tests was recorded at 56.5mpg.That’s a long way off the most economical versions of the Volkswagen Up and Hyundai i10, which both managed in the region of 70mpg, but does place it ahead of petrol-powered Dacia Sanderos.

In normal driving we achieved between 46 and 52mpg, putting it about level with the i10 but behind the Up and its stablemates the Skoda Citigo and Seat Mii.

“Certainly not expensive, but still worth shopping around”

While it can’t match the Dacia Sandero for low starting prices, the Ka+ still represents good value, costing just a few hundred pounds more than smaller city cars. Ford dealers are usually open to haggling, which could save you a bit more cash, but the 114g/km CO2 rating for both engines is a little disappointing, as it makes the Ka+ more expensive to tax than most of its rivals.

Leasing costs aren’t quite as cheap as you’ll find with the Ka+’s main rivals, and it might also be the case that you can find a Fiesta for roughly the same price or possibly even less, so it’s worth shopping around for a few quotes.

“Missing out on some modern safety aids”

The Ka+ comes with six airbags as standard, as well as hill hold assist to stop you rolling backwards when stopped on a slope, and an electronic stability control system.

However, it’s disappointing that Ford doesn’t offer the latest active safety systems on the Ka+, including autonomous emergency braking, which has been shown to reduce front in to rear collisions by up to 40 per cent. With this now being a major component of the industry standard Euro NCAP crash tests it suggests that the Ka+ might struggle to attain top marks.

For those buying the car to share with their kids, Ford’s MyKey is a clever idea, allowing you to programme a second key for the car that will, for example, limit its top speed or stereo volume, or prevent the electronic stability control from being turned off.

“Basic Spec but about right for the money”

The Ka+ is offered in just two specifications. Opting for the basic Studio model means you’ll need to stick to the 69bhp engine, and only get steel wheels rather than alloys. The equipment list is also pretty stingy, with a Bluetooth phone connection and electric windows the only real highlights.

Most, therefore, will upgrade to Zetec, which opens up the option of the 84bhp engine plus adds alloy wheels, an alarm, DAB radio, air-conditioning, cruise control and MyKey.

Many will also be disappointed to note that the only no-cost paint option is bright yellow.

The Ford Ka+ is good fun to drive, spacious for this class of car and represents decent value for money. The poor specification, particularly in regard to active safety equipment, is disappointing, though.

Check out the full review at https://www.telegraph.co.uk/cars/ford/ford-ka-review/