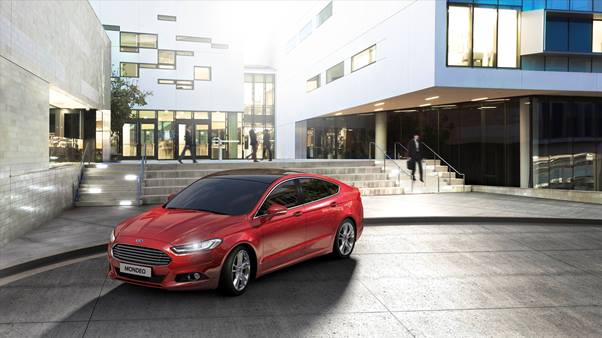 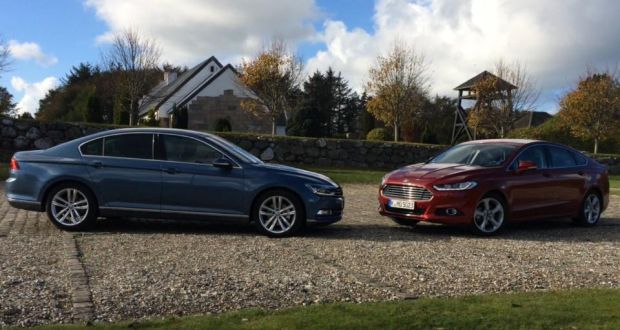 This would have been the heavyweight battle of the motor market a few years ago. However, as we come out of the worst of the recession, the landscape has radically changed.

Thanks to the slicing and dicing of the new car market and the vast array of crossovers and more affordable SUVs landing on our shores, family buyers no longer automatically opt for the saloon format.

Those that do are also being tempted to move up to premium brands which have cut prices on smaller models. Even in the fleet market “user-chooser” schemes mean employees are casting their motoring nets much wider. The saloon car segment is under attack from several sides.

That said, the saloon market is still important to the mainstream car giants: VW, for example, sells a new Volkswagen Passat – or its derivative – every 29 seconds somewhere in the world. And as the car market recovers, and both VW and Ford battle for the title of best-selling car brand in Ireland next year, these models will be vitally important.

Styling The VW Passat is an evolution rather than a radical overhaul. The sleek profile and tasteful use of chrome gives it a rather graceful premium air and there’s certainly some influence of the good-looking CC model in the new look.

In contrast, the Mondeo is a striking proposition, particularly with its dominant big grille. It’s an eyecatching look and the profile is more muscular than before, perhaps even a little Mustang-like in the right light. It’s might not be as sleek as the Passat, but it makes more of a statement – something new buyers like – and garners far more reaction from passers-by than the VW. Styling is incredibly personal but for me the Mondeo has it by a front grille.

Interior Inside, the Passat continues with its premium message. Admittedly, both test cars were well equipped and not exactly reflective of the entry-level fare many buyers will face. But accepting that both get the chance here to put their best foot forward the Volkswagen wins out for its ergonomics, fit and finish.

Rear-seat legroom is not an issue with either car and both boots are big enough for any family needs – better than most crossovers as well by the way.

The Mondeo just doesn’t match the fit and finish of the Passat, and that’s something that could really matter to buyers who spend a lot of time behind the wheel, and where this is effectively a mix of their office and livingroom during the day. The Ford seems to have slipped backwards in terms of the quality of its fit and finish, even though it boasts more tech equipment. The Volkswagen is a better place to spend your time than the Mondeo.

Infotainment/ Technology Ford is eager to get the message out that it’s not just a nuts-and-bolts car builder but an innovative tech firm as well. That’s why it’s front and centre every year at global tech events such as the Consumer Electronics Show.

The Mondeo showcases its latest wares, particularly the results of its work with Microsoft. At the centre of this new Sync system is a voice-control function similar to Apple’s Siri system on iPhones. Except it’s a poor relation of Siri, and considering how little use most of us get out of the Apple system, you can take it that Sync is mostly a gimmick rather than a feature which frazzled family motorists will be using on a daily basis.

The Passat, meanwhile, takes an evolutionary approach with controls very similar to those on high-end Golfs. It’s a nice mix of physical buttons and touchscreen controls. Initially, it might not seem as advanced as that in the Mondeo but it’s actually more intuitive.

In terms of driving aids, both come with options lists as long as your arm and along the way you will offered impressive self-parking features, lane-keeping features which offer a glimpse at what autonomous driving might be like, and the latest safety features such as Ford’s inflatable rear seatbelts.

Both brands are embracing the latest technology and the new safety features are ingenious and showcase the level of innovation at work in the motor industry. However, when it comes to infotainment features both are trumped by any half-decent smartphone with a few apps. That’s the quandary facing every car firm these days: they simply can’t keep up with the pace of change in the mobile market.

Engines Ford sets the pace here with a range of engines starting with its 1-litre Ecoboost petrol powertrain, due to arrive next year. Yes, you read that right: a 1-litre petrol engine in a Mondeo. This might seem a bit mad, but this is a remarkably agile engine.

Both car firms are embracing the latest eco-friendly powertrains as well, with the Mondeo coming with a new 2-litre petrol-electric hybrid, while Passat will have the plug-in hybrid powertrain that features on the new Golf.

However, when it comes to engines my concern with both models lies not with the introduction of smaller petrol engines or hybrids – which will make up a very minor percentage of overall sales – but rather the output of the smaller diesel engines. They represent the majority of Irish purchases. In the Mondeo I spent time in a 2-litre 150bhp diesel that was smooth, quiet and offered a nice steady stream of torque on hand at all times. It was fine for overtaking manoeuvres and you knew that if you kicked down or dropped to a lower gear there was power on tap to get you out of any bother.

However, experience indicates that many Irish buyers will opt for the smaller 1.6-litre 115bhp diesel engine and ,while Ford has achieved good weight savings on this car, I fear it may be slightly underpowered. The same concern exists with the VW Passat, where the 1.6-litre 120bhp diesel is likely to be the Irish mainstay. Having tested the 2-litre 150bhp and found that it lacked a little in pep, I’d be concerned about what the Passat might be like with the smaller engine.

For someone considering either Passat or Mondeo with a 1.6-litre diesel engine, I would strongly recommend you take it out for a decent real-life test drive to make sure it’s up to the job you need it to do. If your budget can stretch, then the 2-litre 150bhp diesel is needed in both cars.

Ride/handling This is the criteria upon which past Mondeos built their reputations. Sublime yet sporty, the Mondeo has always been the benchmark for handling and ride quality in the saloon car market. This time VW believes it has closed the gap, if not taken the lead, with its new oddly-named MQB platform. The latter is VW’s multi-faceted underbelly for everything from the latest Audi A3 to the Passat.

In the Golf it’s a star, the answer to years of being cast in the shadow of the Ford Focus in terms of agile handling. In the Passat it’s tuned for comfort and refinement and it delivers. In keeping with the look and that sense of quasi-premium feel, the new Volkswagen is a real mile muncher, soaking up the bumps without complaint and without any dramatic rocking or rolling.

Yet the Mondeo continues to set a mark in its balance of comfort and handling. Whoever tunes the chassis for Ford deserves a seat on the board, for once more this car manages to be part-sporty, part-cruiser and part magic carpet.

That said, there has been a lot of comment on the Mondeo’s new electrically-assisted power steering system. Ford has opted for this format over hydraulics in order to shed kilos and lower fuel economy. There’s a noticeable weighting of the steering that brings it back to centre, which is nice and intuitive if you’re guiding it through a series of bends. For me the Mondeo was still the better – and more enjoyable – car to drive on more challenging twisting roads, while at the same time it didn’t lose out when it came to comfort and suppleness on the motorway.

Pricing At present Ford has only released official prices for the mid-range Zetec and high-end Titanium versions, but in a like-for-like they are slightly better than the Passat.

Moving up the mix let’s look at the 2-litre 150bhp diesel versions of either car with mid-level specification. The Passat Comfortline is €32,990 while the Mondeo Zetec is €31,845.

There used to be an argument that the added value on the Passat would be negated by a higher resale or residual value, but according to some in the industry the high volume sales of VWs these days means that’s unlikely to be such a factor when these two cars are traded in in three or four years’ time.

Overall It’s a really tight call and over two days of testing my view on the overall winner changed as often as the autumnal weather. For refinement, that touch of premium-like appeal and a car that you would feel comfortable spending several hours a week behind the wheel, then the Volkswagen takes some beating. In the attempt by mainstream brands to move their saloons upmarket this is the model the others must mimic.

In contrast, the Mondeo still doesn’t seem as refined or premium, while it’s also troubled by the fact it is nearly two years late to market here. It should have been on forecourts across Europe more than 18 months ago, having been on sale in the US under the Fusion moniker since 2012.

The delay was down to the decision to move Mondeo’s European production from Genk, Belgium, to a new production line in Valencia, Spain. The wind-down meant European sales were held up and you have to wonder how long this “new” Mondeo will be on our roads before a facelift arrives. Despite claims by Ford that this won’t really be an issue, I still think it’s a concern for buyers.

Yet while my head argues for the Passat, with its history of stronger residuals and that air of refinement, my heart says Ford simply because it’s more fun to drive. If I was heading from Dublin to Cork on the M8, then the Passat would probably win out, but from Cork to Tralee or on any of the twisting national roads that thread together most of our towns I’d prefer the Mondeo. It’s an incredibly close call but the Mondeo has it.