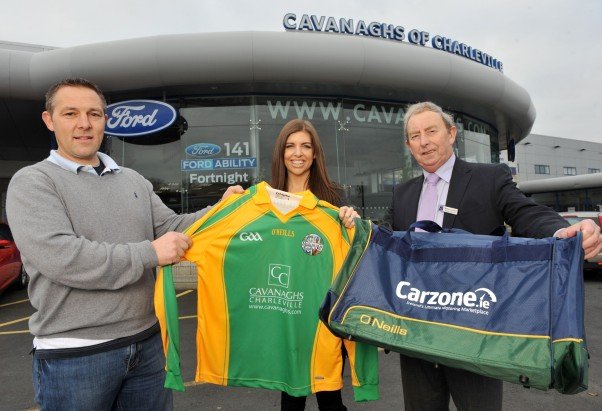 The lucky team today received their sponsored kit, which consists of a set of branded jerseys, a pair of shorts, socks and a match bag for each member of the team as well as, water bottle sets, first aid kit, sports marker set and training bibs.

Commenting on the win, John Flavin, club chairman of Monagea GAA Club said: “We are absolutely delighted to win the Carzone.ie sponsorship and would like to thank the team at Cavanaghs of Charleville for nominating us in the first place. We are very pleased with the new kit and all the accessories. It looks great and we look forward to testing it out during our upcoming matches.”

Martin Condon, Managing Director at Cavanagh’s of Charleville commented: “We are fully aware of the importance of community especially in these times and we are thrilled to have won this sponsorship for a local team. It’s terrific for us to be associated with the club and we all wish Monagea the very best of luck for the season ahead.”

Monagea is the home club of Sales Director at Cavanaghs, Liam Herlihy, and his son Sean – who also works with Cavanaghs – is happy to line-out in the club colours every week.

The competition is being run by Carzone.ie, Ireland’s leading online car website, which has been calling on car dealers nationwide to nominate their local sports team of choice. This sponsorship initiative will see ten local sports clubs receive their very own branded kit courtesy of their local car dealership over the next few months, giving car dealerships the opportunity to support their local community.