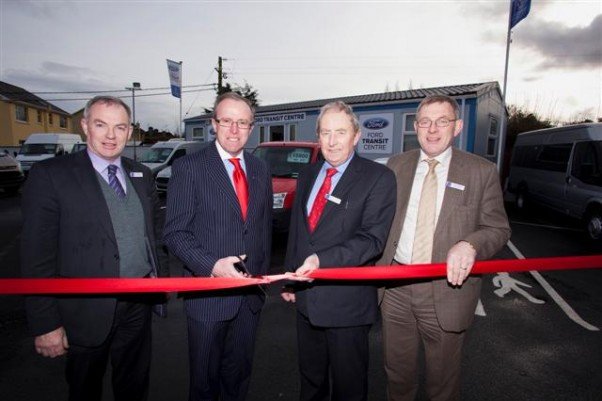 In what must be seen as a positive sign of things to come, well-known north Cork Dealership Cavanaghs of Charleville Ltd this week officially launched Munster’s first ever Ford Transit Centre within the Ford Dealership Network. Ford Ireland Chairman and Managing Director, Eddie Murphy was on hand to cut the ribbon at the new centre which is exclusively dedicated to stocking the Ford commercial vehicle (CV) range such as the New Transit Custom, Transit Connect, Ranger Pick-Up, Kuga Jeep, and Fiesta and Focus car vans.

Commenting on the opening Eddie Murphy of Ford Ireland, said: “This is great news for commercial vehicle customers across Munster and we wish Martin Condon and his team every success. Our CV customers deserve to have the same high standard of service and customer care that all our passenger car customers have come to expect from Ford dealers.”

Martin Condon, Dealer Principal at Cavanaghs, added: “Selling Ford Commercial vehicles and especially the Ford Transit range, has always been a mainstay of our business here at Cavanaghs. Whilst the last few years have been a rough ride for the Commercial Buyer, we are starting to see a bit of light at the end of the tunnel and we are hugely encouraged by the new Ford Transit Custom and the range of vehicles coming down the line from Ford.”

The launch of the new Ford Transit Centre at Cavanaghs comes hot on the heels of the new Ford Transit Custom being voted International Van of the Year and Continental Irish Van of the Year 2013. The Transit has been Ireland’s biggest selling van exceeding over 100,000 units in sales since its introduction to the Irish market more than 45 years ago and is still the market leader today.

Cavanaghs of Charleville employs 47 full time staff at its location in Charleville on the border between Cork and Limerick counties. It is also a Ford Commercial Service Centre and has four dedicated lifts available to Commercial vehicles at all times including Saturday opening.