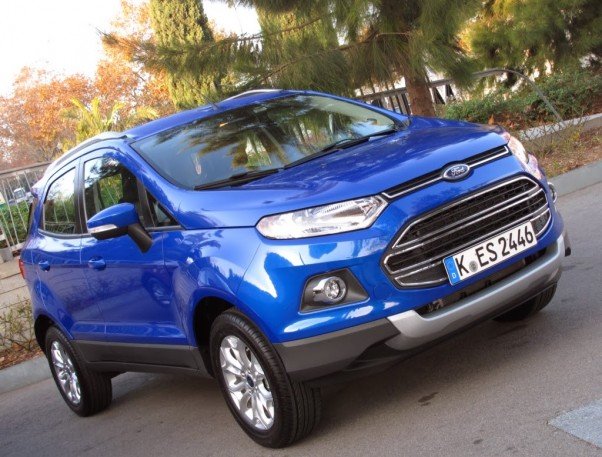 Ford people admit that they’re coming to the small urban SUv party in Europe late, writes Brian Byrne from the European launch of the EcoSport in Barcelona. But being a global carmaker they had something in the closet they could arrive in fairly respectably.

The timing was good. A rugged small SUV which they introduced in Brazil was very successful there, and due for a regeneration. The EcoSport we’ll see in Ireland around April or May will be that second generation Brazil-designed car.With some changes, they say. About 300 changes, mostly under the skin and inside the car itself.

A lot to do with higher grade interiors, different mapping of the ESP and steering to suit European drivers. Powertrains to meet Euro 5 requirements. A more pedestrian friendly front end to help with ENCAP rating.
Which latter, by the way, is four stars.

Nick Fitzgerald, chief programme engineer for EcoSport, said the fifth star would have taken time to achieve, delaying bringing the car to Europe even further. Getting there would have needed stuff like a speed limiter, City Safe, warning lights for rear seatbelts.

Fitzgerald says proving all that could have taken another 18 months. And he’s not convinced it would have made much difference to sales.

Besides, the car did achieve 93 percent occupant protection, which is arguably the most important part of the regime. It also has as standard ESP, rollover mitigation, and a bunchof the usual acronyms related to electronic management of the car’s handling in extremes.

It will also come with rear parking sensors, automatic climate, and keyless entry in the Titanium grade which is the only one coming to Ireland. Ford’s SYNC connectivity, with AppLink that will allow voice-actuated apps on the user’s smartphone, will be offered.

It’s a roomy car, considering it’s on a Fiesta platform. There’s quite decent accommodation for adults in the back, and because only a FWD version will be sold in Europe, there’s good room in the boot too. Partly because the spare wheel — yes, there’s a real full one — is hung off the back door.

South American and Indian markets favour that, as a macho image. Besides, there simply isn’t room under the rear floor for it without major reengineering.

The interior styling is very familiar, originally debuted in the Fiesta and used in a variant form in the Focus, and coming too with the new Transit Connect and Tourneo Connect. We were advised that the quality and colour schemes on the international launch cars were pre-production, and to expect something of an upshift in perceived quality when we see the final cars.

The EcoSport will come to Ireland with three powertrain options, a 1.0 125hp EcoBoost 3-cylinder which we’re all familiar with and impressed by, a 1.5 petrol four with automatic transmission and more sluggish 115hp, and a 90hp 1.5 diesel four. Ford Ireland is reviving an old marketing trick by offering all three at the same price.

I only got to drive the 1.0 petrol on the Barcelona introduction today, and found it well capable even around the twisty hills up at the back of the city. The EcoBoost is basically built for tougher terrains and isn’t the lightest of vehicles in its class, so I’d have reservations on paper as to how the diesel might suit it.

But the structural build quality seemed good, and no squeaks or rattles made themselves evident. Apart from the distinctive note of the 3-pot, which I find pleasant enough, it seems like a relatively quiet car too. A nice driving position and a tidy handling experience left me feeling quite positive about a car which was not originally designed for Europe.

At a quick glance, the €24,000 price tag for Ireland might look a tad high, compared to the entry prices for some of the competition already here. But the level of specification might well even things out.

We’ll see, when it comes. Meantime, nothing on the introduction to the car has so far put me off it.