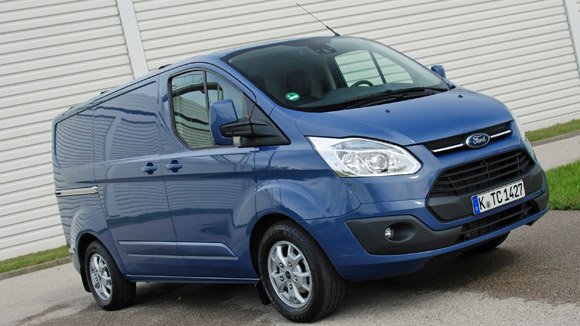 With its bold new design, car-like interior and outstanding driving dynamics, the Ford Transit Custom is targeting an expanded share of the segment, appealing to a broad range of professionals, skilled tradesmen and small businesses.

The new model has lost none of the legendary Transit toughness and value, however, combining class-leading load-carrying ability, impressive durability and attractive cost-of-ownership – with best-in-class fuel economy.

With a full range of van, kombi, and double-cab-in-van models, the dynamic new Transit Custom will go on sale later in 2012 in Europe as well as other global markets. The Transit Custom model will not be offered in North America.

In addition to offering maximum load volume which exceeds that of its closest competitors (6.0 cubic metres SAE with full bulkhead fitted), the load area of the Transit Custom has been carefully optimised to offer more space and more convenience than any of its rivals.

Key features and innovations include:

Load-through hatch in bulkhead enables loads up to three metres in length, such as pipes or ladders, to be safely carried inside the vehicle.

Class-leading width between wheelarches allows wide loads, such as 8 feet x 4 feet (2440mm x 1220mm) boards to be easily accommodated flat on the floor (or stored vertically if required).

Class-leading height and width of sliding side load doors for ease of loading.

Deployable integrated roof rack system seamlessly integrated into the roof, and can be deployed when required.

When not in use, the cross bars can be quickly folded down, reducing drag and fuel consumption, as well as keeping the vehicle height under two metres (with the exception of the 330 series).

Repositioned tie-down hooks and fixing points located on the body sides, leaving the floor clear for easier loading and cleaning.

To provide customers with a wide range of payload options from 600-1,400kg, Transit Custom is available with multiple GVM options.

“This may be a more stylish Transit, but it’s a more functional Transit too,” said Barry Gale, Commercial Vehicles chief engineer, Ford of Europe. “The additional features we have built into the load space make everyday functions more convenient – so it’s easier for customers to do their job.”

The modern, driver-focused cockpit features a sculpted instrument panel which combines stylish looks with smart stowage solutions for bottles, phones and papers. Driver comfort is significantly enhanced through a highly adjustable driving position which features increased seat travel – including 30mm more rear travel for taller drivers – and the addition of a steering column adjustable for reach and rake.

Once behind the wheel, the driver can call upon a wide range of available driver assistance technologies also featured on Ford’s latest passenger cars, including:

SYNC voice-activated, in-car connectivity system – enables mobile phones and music players to be connected to the vehicle, and operated by voice control.

Emergency Assistance – enabled by SYNC, this award-winning new feature is designed to assist occupants to contact the Emergency Services in the event of an accident, providing vehicle location information.

The strong driver appeal of the Transit Custom is reinforced by dynamics and performance which have been carefully tuned to reflect the same natural and easy-to-drive character which customers appreciate on Ford’s car range.

Minimising overall cost-of-ownership was a high priority throughout the vehicle design and development, with key features including minimised maintenance and repair times, a 12-year anti-perforation warranty, and the longest service intervals in the class at two-years /50,000 km/30,000 miles.

To ensure the legendary Transit toughness, the all-new Transit Custom has been subjected to Ford’s ultra-stringent Commercial Vehicle testing and durability standards.

Even before the vehicle goes on sale, it will have been driven the equivalent of five million km (three million miles), including at least 400,000km (250,000 miles) with Transit customers. Key components and systems are tested to the limit: for example, doors go through an intensive regime of 250,000 slam cycles, which is three times more punishing than Ford’s equivalent passenger car test.

New generation of Ford commercial vehicles
The launch of the Transit Custom marks the next step of a complete transformation of Ford’s global Commercial Vehicle range which will see the entire line-up replaced by 2014.

Ford will be presenting larger and higher payload Transits later in 2012. These models will be extensively sold on a global basis, including North America, and will also feature rear-wheel-drive.

Production of the new Transit Custom will start from mid-2012 at Ford’s plant in Kocaeli, Turkey, with market availability later in the year.