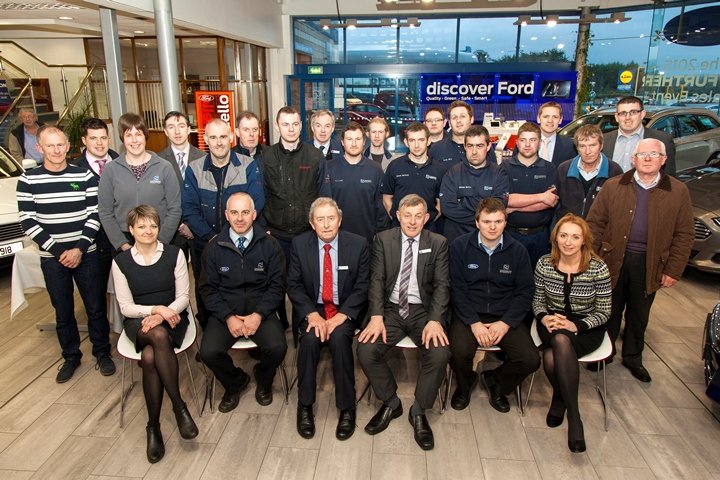 Cavanaghs of Charleville was again recently singled out for special attention by Ford Ireland when its Aftersales & Service division scooped the Ford Chairman’s Award for Customer Satisfaction.

The result – which is the outcome of a continuous process of customer surveying of Cavanaghs customers by Ford Ireland over the course of the year – saw Cavanaghs achieve an overall score for the year of 88.4% satisfaction against a Ford target of 76%. The surveys were sent out throughout the year to people who undertake service or repair work at any Ford Authorised dealer from around the country. The winner was then selected based on the best Percentage Improvement over the previous year.

This brings to fourteen the number of Chairman’s awards that Cavanaghs has won since 1997 both in Sales and Aftersales. It won the Chairman’s Award for Outstanding Customer Satisfaction for an unprecedented 7 years in a row from 1997 to 2003 and a further 7 in a row between 2008 and 2014.

Commenting on the win, Chief Executive of Ford Ireland Ciaran McMahon paid tribute to the team at Cavanaghs: “Winning one of these awards is not easy and to return year after year in either Sales or Aftersales speaks volumes for the continuing commitment of the staff at Cavanaghs to getting it right. This award is just recognition of a task that never really ends and Cavanaghs deserves to be formally singled out amongst the Ford network.”

Cavanaghs has also been retained as a Deloitte Best Managed company for 2015 and will be receiving its award at a ceremony at the RDS in Dublin on Friday, 6th March.

Cavanaghs now employs 45 full time staff at its site on the Limerick Road in Charleville and serves a large part of Limerick city and county and Cork city and county for sales, service, parts, body repairs as well as a number of national contracts with large fleet customers.