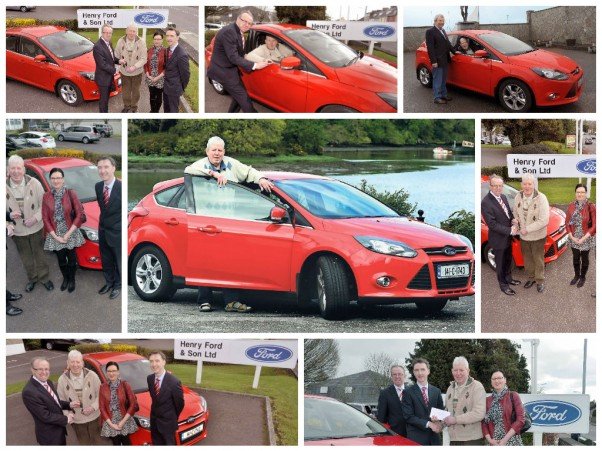 A lovely story to relate to our customers.  Earlier in the year Martin Condon handed over his 30th (yes thirtieth!) new Ford to Mr Philip Lewis – a native of Cloyne, Co. Cork – now living in Midleton.

Mr Lewis has amassed the significant record of having purchased 30 new Fords over the last 45 years – all from Cavanaghs of Charleville, and all sold to him Martin.  Martin continues to be the only person Philip has bought a car from in his lifetime!

His first car was a red Ford Escort registration number GZT307 which he purchased in 1969. He is currently driving a ‘Race Red’ 141 registered Ford Focus Zetec Hatchback.

During his lifetime, Mr Lewis has owned all of the following models on more than one occasion; Ford Escort, Ford Cortina, Ford Capri, Ford Orion, Ford Sierra Ford Fiesta and Ford Focus.  He recalls having one of the first Capris on the road in Cork which was registered as UZT857 and he recollects that it looked very much like a sports car given that it had a black vinyl covering on a solid roof. He also remembers owning a Capri that attracted a lot of attention at the time given that the colour was a resplendent canary yellow! His penchant for colours seemed to be a theme during his early years of ownership as he also professed to having owned a lilac Capri with registration number IS1300. “At the time, it looked lovely”, he fondly recalls.

The Capri was a standout Ford car and continues to have massive following amongst car club enthusiasts, Mr Lewis reflects, but when asked what his favourite model over the duration of his life was, he candidly replies: “I suppose it would have to be the Ford Focus. It has been an outstanding car for Ford and I can see why. It drives very well, gives very little trouble and is efficient to run”.  In fact, Mr Lewis seems to be a ‘lucky owner’ recording very little trouble down through the years, “I never had any real problem with any car”, he remarked. Many of his friends at the time were puzzled as to why he didn’t try other brands and test out other types of cars: “I didn’t see the point to change. The cars all drove fine, so why change? I always went to Charleville too. When it wasn’t broke, why fix it?” he added.

He reflects on how Technology has changed and is now driving how cars are built and what is put in them. For the most, part all of these changes are good, with lower emissions , cleaner cars and safer cars being the real big advantages to come from the high tech era, Philip remarked.

“I can remember that if you had a Ford with a 1.3 engine you would only get what were known as ‘Cross ply’ tyres.  However, if you got a Ford with a 1.6 engine, you would get what were called “Radial tyres’. That was a big step up. When competition came in from other manufacturers, Ford was always quick to react to that and come out with some new feature that was better again”, he commented.

Whilst he claims he doesn’t remember all of the registration numbers, he does show a remarkable ability to recall certain numbers and details of particular cars that were of special significance to him.  “Some of the more memorable numbers stick with you. For example, VZB727 was a Sierra I once owned. I don’t know why, but that number sticks with me”.

For the most part, Mr Lewis used his cars to travel within Ireland, though he does recall heading across to Wales on several occasions with his wife.  “We went across on the ferry from Rosslare to Pembroke many times.  On one occasion, I recollect that I needed petrol and couldn’t get it in to the car, or there was a problem with it anyway. I remember I called to the nearest Ford Dealer who was in Tenby and he figured out that the fuel filter was blocked and had some mud in it. Of course, he got it sorted.  A small job. I seem to have been lucky with cars, thank God. I never had much trouble with them. But all I ever knew was Ford, so that must have been the common denominator”, he remarks.

What a remarkable story which has received some national press and great for Cavanaghs to be associated with it.